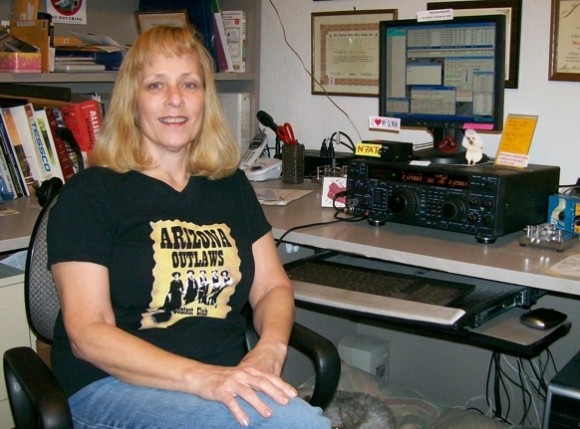 Sandy Farley N7RQ:
I received my ticket in October 1990 as N7PQP a couple weeks before the CQWW SSB contest. With a Kenwood TS530S and a small vertical antenna on a condo patio, I spent the weekend of the contest listening to all the different contesters, looking up their locations, dumbfounded at the number and variety of people on the air. To say I was hooked is to put it mildly. Within a year, I had my Extra call and I was busy contesting and active in two local amateur radio clubs.

Field Days provided a great opportunity to learn many aspects of amateur radio, and it was an awesome training ground for learning and honing contesting techniques. I had the added advantage of working Field Day next to some of the world’s now-best-known DXers and contesters, who I’m still proud to call friends and role models.

After a few years’ absence from amateur radio, I got back in the saddle with a 100-watt Kenwood TS870S, and a Mosley TA53M + 40 meter add-on dipole on a 48-foot HDBX tower in east central Phoenix, Arizona. I was fortunate to be invited to guest op at the QTH of K8IA, Bob Epstein, a seasoned and enthusiastic contester, and former Contest Coordinator for CADXA. My first-ever 80 meter and 160 meter contacts were made from his QTH. Little did I know, those first years of experiences at digging out and working weak-signal stations with my modest first rig and antenna would pay off on 80 and 160.

The friendship between Bob and I blossomed into romance, and we were married by Outlaw Willie in true Outlaw fashion on July 5, 2007 in Oatman, AZ on historic Route 66.

In May 2009, Bob and some of our dearest friends began discussing the fulfillment of a dream: a full-fledged radiosport club for Arizona. The following month, with the help of Mike KC7V, John K7WP, Dave AB7E, and Dick W7ZR, Arizona Outlaws Contest Club was born.